During the past 24 years of reviewing forklift trucks I've experienced bum-numbing drives with some diesel models. This is fine for porkers like me who desperately need flab reduction, not so good for slimmer drivers who have little backside cushioning.

But Mitsubishi has changed that with its FD70N. The combination of fully floating power train and suspension seat reduce transmitted vibration to the extent where it's sensed rather than felt. Though Mitsubishi's beautifully balanced 6 cylinder S6S engine has a lot to do with this.

The first thing you notice about the Japanese-made FD70N is its compact dimensions relative to load capacity.

The overall length to fork face is just 3,592mm. Yet the height to the overhead operator guard with mast lowered is 2,610mm, so the vehicle looks shorter than it actually is. Stability is not an issue as dual front wheels are fitted, bringing the maximum width to 2,173mm. 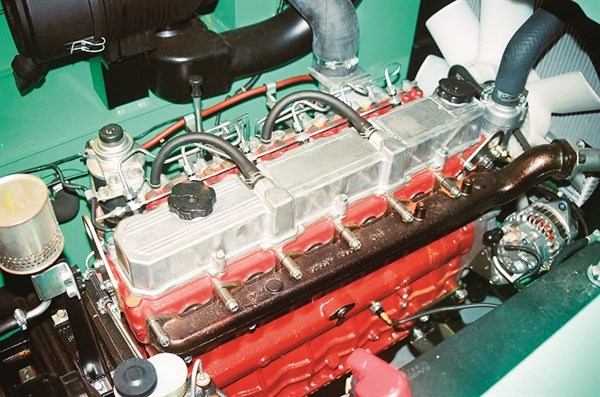 The S6S has plenty of grunt down low, just where it's needed for moving the full 7-tonne rated load plus dry vehicle weight of 9.5 tonnes.

Having tested marine engines for almost 32 years, it would also make an excellent power plant for displacement cruisers or work boats to nine metres, but this review is not about boating. 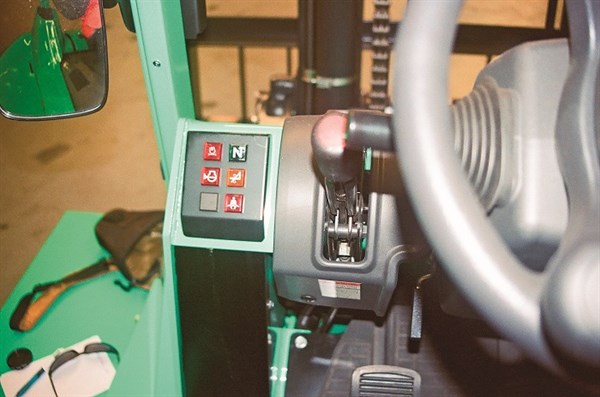 To left of the steering wheel with its rim knob are the mechanical handbrake and a bank of indicator lights (such as neutral position) and to the right an instrument panel containing warning lights for engine overheat and low oil pressure, parking brake and glow plug on and an hour meter and fuel gauge.

Standard are four levers in the normal position: fork raise and lower, mast tilt, fork side shift and an auxiliary control for a prong rotator with the hydraulics for this plumbed in. 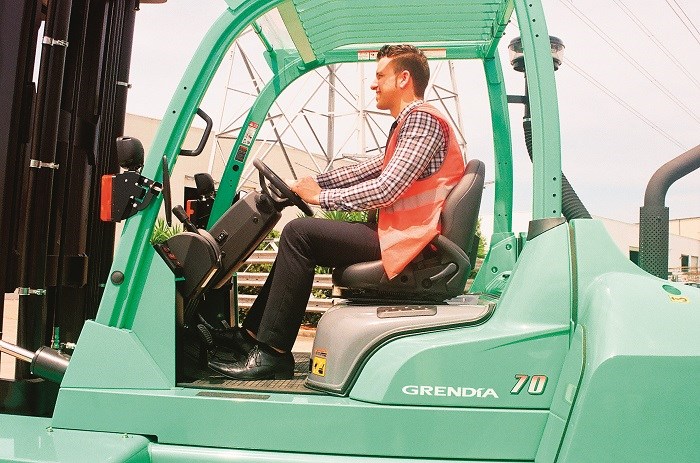 After a brief glow plug warm-up the S6S engine started instantly with no black smoke appearing.

After getting used to the controls I tried the 2-speed powershift transmission, operated by a small lever to the left of the steering wheel.

With my foot firmly on the brake, I released the well-placed handbrake and selected forward, which engaged with barely a clunk. At about 10km/h it shifted positively into second gear and I accelerated to about 15km/h.

Mitsubishi claims top speeds of 22km/h laden and 28 unladen, but 15 was plenty fast enough in that car park. The brakes worked quickly with just gentle pressure, so standing on the brake pedal to stop the machine wasn't needed.

Having a relatively short wheelbase, the ride was a bit choppy over the undulating concrete surface but the suspension seat eliminated any shocks through my bum flab.

In reverse the demo unit changed up at about the same speed and by using the steering wheel knob and turned to look over my shoulder the vehicle could be positioned exactly where wanted.

The combination of short wheelbase, light hydraulic steering and tight turning radius were great for reaching cargo in tight spots. The engine torque kept the vehicle turning without needing any throttle opening, so my foot could be kept over the brake pedal.

Because of the massive bottom end torque of the engine, on level ground I could inch the forks into the pallet without using the inching pedal, instead applying varying pressure on the main brake pedal.

In my opinion being able to keep my foot on the brake at all times was safer than using accelerator and inching pedal, though on up slopes this combination would be needed.

The lift and mast controls fell to hand and with the high seat position I could clearly see the forks for inching into the pallet.

A gentle raise, mast back slightly, then onto the accelerator for rapid lift or lower. The overhead guard rails and clear roof panel didn't affect my view of the cargo.

The FD70N won't make flabby forklift operators any fitter but I'm sure there are lesser diesel machines up to the task.

Mitsubishi has put a hell of a lot of effort into designing and engineering this machine. Its ergonomics will reduce operator fatigue and the easy servicing access will save a lot of wasted time.

The S6S engine and 2-speed powershift are way better than just a single speed torque converter and I really liked having two speeds in reverse as well as forward.

Originally published as "Smooth Operator" in ATN Magazine and Plant & Equipment Magazine. Andrew Norton's full review of the Mitsubishi FD70N can be seen at www.tradeplantequipment.com.au. 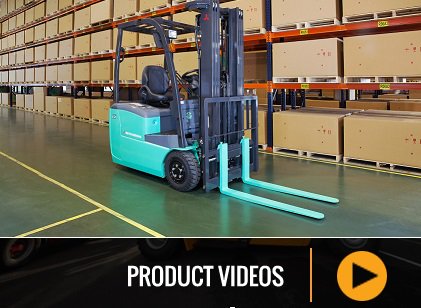